Few things in life bore me more than cliches, and sadly, the whole-low-esteem-imposter syndrome-hate everything-I-write thing has become something of a cliche. As with any cliche, it doesn’t matter much how rooted in reality it is. It is tedious, boring, tiresome, repetitive and nearly as redundant as the sentence you are reading.

Yes, he’s a brash and arrogant blowhard who is way too pleased with himself and his films, but in a weird way, I like that about him.

A return to the days of the badass scribe would be great, but I suspect a list of true badasses would likely begin and end with Hemingway. And a deeper dive would probably reveal he was terrified of bulls.

Fast forward to today and we get Quentin Tarantino, a filmmaker as bold as he is brilliant. No insecurities here. The guy loves his movies as much as you do. The clever dialogue, the stunningly inventive structure, the brave casting choices. He even seems to feel okay about his acting.

And if you’re like me, you probably think he’s going about being a writer/artist in the wrong way. He’s not supposed to consume his art, and he’s certainly not supposed to enjoy it.

David Letterman, on the other hand, hates everything he does and readily adheres to the stereotype of the self-loathing artist, eternally nursing a case of impostor syndrome. After all, what better way to illustrate that you are a real artist than to express the belief that you’re not a real artist?

Outside of rappers, porn stars and occasionally rocks stars, Tarantino’s brand of confidence is nearly unheard of in the arts world. And I like it. It’s a fun change of pace and it provides a great role model. We should all love what we do as much as Quentin does. Not just because it makes you a better talk show guest. But because it’s fun. As an artist, it’s a good idea to lean back from your canvas and savor your creation. It’s healthy and it energizes you to create more. Who doesn’t want to do more of something they enjoy and excel at?

The problem is, it’s not so easy to be Tarantino. Personally, I’d say I rank somewhere between Quentin and Dave on the Self-esteem-o-meter. More precisely, I tend to bounce between the two extremes, unable to make up my mind if I’m brilliant or awful. I suppose I feel I’m capable of good, even — dare I say it? — great writing and writing makes me wonder why I bother.

How about you, fellow scribes and artists? Where do you fall on the spectrum?

Yeah, it’s been forever since I’ve posted anything here, but don’t worry. I’m still alive and still giving glorious birth to crime fiction laced with danger and bad decisions. In fact, I’ve been too deeply immersed in my writing to fol 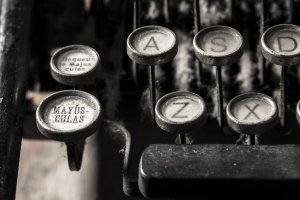 low the news. Anything new happen since my last post of November of 2016?

No, nothing? Okay, here’s what I’ve been up to:

My noir-ish monologue What a Real Punch Sounds was produced by Ragged Foils. I think Joanna Simpkins did a splendid job. See for yourself here!

I wrote and produced a neo-noir audio drama called Cosmic Deletions that asked such all-important questions as: What if that telemarketer is actually an assassin? and What if the world was actually the creation of a software company? Show some love, Copperheads!

Also, hey look at me playing the ukulele! Who says quarantining is boring?

Yeah, that’s actually a thing — at least in the movies. Nerdwriter, as always, is right about everything.