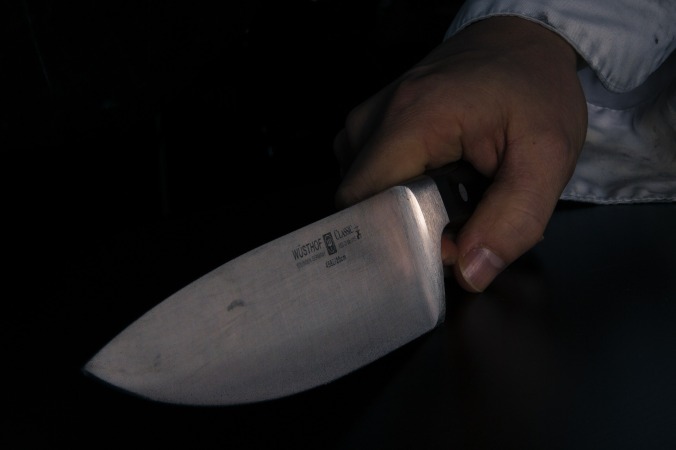 San Matteo is a moneyed suburb just outside of LA, the kind that stays safely hidden away on the coast until something horrible or impossible happens there. This is where Alice’s lover resides. From the moving bus it blurs into a streak of broad strokes like a Monet. But when the bus stops the place unfolds itself more like a Norman Rockwell: idyllic, warm, oppressively charming.

As night falls I find a home in the bushes, with plenty of time to ponder nothing and everything. My head is mostly filled with images of Alice. That reluctant half-smile that precedes every kiss. The toss of her hair and the shake of her shoulders that somehow passes for dancing. That elusive step back she would take at the wrong time, every time. When I wanted to hold her, taste her, keep her to myself.

The machete isn’t a tool designed for precision. I wouldn’t recommend it for gall bladder surgery or peeling an avocado. But when you long for that sense of completion that comes from a lopped-off limb tumbling to the earth you can’t go wrong with eighteen inches of sharp Honduran steel. The machete gets things done. That’s why I’m fearless now, motionless, ready to spring from the shadows and do what needs to be done.

And the lovers seem ready as well. Ready to taunt me with the fragrance of clandestine romance. They traipse hand-in-hand from the garden to the small pond by the back door. I catch them in mid-conversation, wooing away:

“And I could choose anybody?”

“Anybody past or present. Dead or alive. Megan Fox, Marilyn Monroe. Anybody.”

“Anybody? And I get instant immunity?”

“I’m joking! You know it’s all about you. Jesus Christ!”

A young Jesus Christ? Like carpenter days, before the crucifixion?”

“Will you just shut up and kiss me!”

He cradles her face and delivers this:

“Gladly. From now until the end of time. Every minute of every day.”

It would probably make me sick if I could feel anything right now.

They turn – wide-eyed with panic – upon hearing a stir in the bushes. Did I stumble unknowingly? Did I clumsily tap a branch or place a foot wrong?

Whatever the reason, the time to strike is now.

I charge, machete raised, and the nightmare is cranked into motion: screams, flailing arms, faces twisting into rubbery masks of horror. It is the sweetest kind of chaos. It is victory.

But the first swing sails over the intended target’s head and lands nowhere. I stumble, giving them a head start, a line to the back door. They dash inside with a speed they never before felt necessary.

But not speedy enough. They struggle to slam shut the door, and I beat it down, with purpose, with anger. They are mine.

First is the man – not planned that way, just his lousy luck. He catches a stab to his collarbone and meets the floor with a dull thud. I yank back my weapon and provide another slice to his abdomen, and why not. His reply: the longest, saddest squeal I’ve every heard. Then nothing.

And Alice has scrambled away.

The house couldn’t be quieter, placid even. Where could she be?

The kitchen pantry? I rip the door open: nope.

Bedroom? Not a soul to be found.

There’s breathing down the hallway. One more closet to check. I kick it down:

And she has a gun.

The snub-nosed revolver flutters in her hand like it may as well be a remote control or a Rubik’s cube. She’s not ready to use it. Maybe she never will be.

“Don’t come near me?” She repeats, but it still sounds more like a question than a command.

This shouldn’t be a tough question, even after all the lies and this explosion we’re in the middle of. But as she looks at me she seems to find the eyes of a stranger. This is bad. So I repeat: “Do you love me?”

She shakes her head ‘no.’

She looks away for a second. That’s all I need.

The first swipe takes off her right hand and sends the gun spinning to the floor. If it ever landed I never heard it. All I can see and hear is that mouth melting into a horrified wail. She boasts the bulging eyes of comic strip character when meeting a second swing. Maybe I just imagined it but she seems liberated as she drops to the floor. Like a prisoner pardoned from a nightmare.

I almost want to join her. Almost.

But right now there’s a strange kind of beauty racing through my veins. Maybe it’s the rawness of it all. The carved up bodies of this love-hungry couple, their faces frozen in terror, their stillness. Nobody can tell me what I’m seeing and feeling and smelling isn’t real.

Not even those bastards at the clinic with their pseudo-psychological bullshit, calling me ‘delusional’ and telling me that Alice was just a voice on the radio, a pop singer residing a million miles away, not my life, my love, my reason for being.

And nobody can take that away from me.

I originally had The Sweetest Kind of Chaos published at Beat to a Pulp. Check them out if you love masterfully written tales of noir!