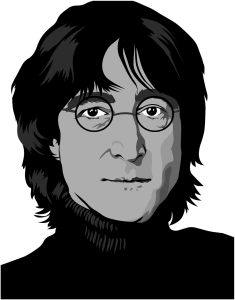 Nothing to Kill or Die For

It was the weirdest job I’d ever taken. No double-crossed thugs, no unpaid loan sharks, nary a cheating spouse to be seen. Just a creepy loner who needed a bullet to the skull before he could carry out a sick plan to make the world a lonelier place.

And damned if I’d ever had to do that much travel before. But they told me the payday would be worth my while so I sailed off strapped with a 9mm. and a head swimming with 80s nostalgia.

Fighting off a stiff December breeze I wove through the Manhattan streets, eager to find my mark and get the job over with – but good luck fending off the distractions of that gorgeously insane place. The sidewalks were a freak show, alive with coke-fueled madness and the promise of dangerous sex.

I spent my first ninety minutes spinning deeper into that breathtaking web, absorbing everything. The sights – even the subway graffiti was somehow beautiful.

The smells – real food, made by real first generation immigrants.

How could I not lose track of time? Shit.

I raced from the subway, determined to get across town to The Dakota before it was too late.

It was too late. A cloaked figure – arms extended – closed in on his target rising from a limousine.

“Everybody get down!” I shouted, and both bodies dutifully dropped. I waited for the gunfire. But it never came. The autograph seeker turned, his face frozen. Unfamiliar to me. He wasn’t my mark.

I slipped into the shadows, chagrined.

Then I heard steps and the gun being loaded. But saw nothing.

“Get down!” I wheezed, no voice left after the false alarm. I still saw nothing, but tried again: “Somebody’s got a gun!” Smirks all around. Who’s the wiseguy? they had to wonder.

My head swiveled, swept the shadows, the alleys, behind the dumpster. Nothing.

Another click. A hammer yanked back. No more steps. A silhouette emerged, stepped into the moonlight.

He turned. This was my mark. Sharing that demented grin, glassy eyes shinning on. Like the moon and the stars and the sun. I could see the marquee beaming in his head. He was there already, finished, famous, complete. Nothing left to do but add the exclamation point.

But I had to fuck things up by being a quicker draw. “The dream is over, motherfucker,” I said. And I shattered his face into a mess his mother wouldn’t recognize. Twice.

I dove back into the shadows and scampered away, the scene now bathing in stunned silence.

It was time to get back to where I once belonged, back to spring of 2016, a world that could now watch Yoko grow old with her walrus.

I originally had this published by the lovely badasses at Pulp Metal Magazine. Check them out and show love!